On Sunday, Sydney locals walked a key inner-city corridor for the first time since 1855.

For 129 years the Goods Line carried some of Australia’s most important commodities: coal, shale, wheat and timber. By the time the train line was put to bed in the 1980s, gone was heavy industry and in its place were cultural institutions including the ABC studios, the Powerhouse museum and the University of Technology Sydney (UTS).

Construction of a $15m revitalisation project commissioned by the Sydney Harbour Foreshore Authority that would open public access to the former rail line, began in April 2014 and opened quietly over the weekend, with children playing in the small water park and locals soaking up sun on the grassy knolls.

Speaking from the Goods Line on Sunday, co-architect John Choi of Chrofi architects said locals had turned up and were “taking their shoes off, as if it’s their front lawn”. 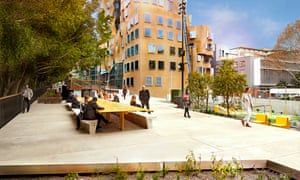 It has been a century and a half since the 500m passageway – linking Central Station’s Devonshire Street tunnel to the Powerhouse museum – has seen pedestrian access, so it’s little wonder locals have been clamouring to use it.

Co-architect Sacha Coles of Aspect Studios spotted locals moving the barriers aside to enter before the official opening. “They were literally breaking down the doors to get into here,” he said.

There are others signs Sydneysiders have claimed the space as their own: one pole already bears a poster depicting a lost macaw called Rocco (“massive reward if returned”, it reads). 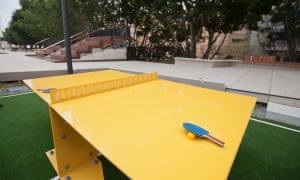 While the Goods Line cannot rival its more famous New York counterpart, the High Line – a 2km elevated repurposed railroad that snakes through the city – both projects belong to a worldwide movement of urban renewaland revitalisation.

Coles said not only is the surrounding area a “hotbed of creativity”, with more startups and creative industries than anywhere else in Australia, it is also the nation’s most densely populated. “There’s apparently over 80,000 students at UTS and Tafe. They will be the major beneficiaries of this space,” he said.

On Monday many of those students will walk the Goods Line for the first time discovering a 20-person table equipped with power points, Wi-Fi access, an outdoor gym, an amphitheatre for performances, ping-pong tables and quieter nooks and crannies under a line of fig trees the designers have dubbed “study pods”. 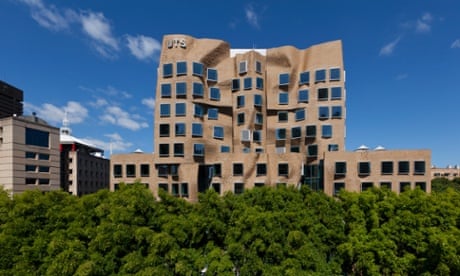 The line also provides front-seat views to Sydney’s newest architectural jewel, the UTS Dr Chau Chak Wing building designed by Frank Gehry, dubbed “the paper bag” for its crumpled appearance. “The UTS representatives who came to look at [the Goods Line] were blown away – yes, by the project but also by theirproject,” Coles said.

Sydneysider Rory Carroll, here with his wife and three children, called the design “long overdue” and said Ultimo has “lacked a place where people can congregate”.

“You’re either inside or on the street – so this is new. There’s no cars around, it’s just a different vibe,” he said.

And while it didn’t win everyone over (one UTS architecture student said it was “less atmospheric” than she expected, while another local had hoped for more greenery) industry heads have awarded the project a 2014 Planning Excellence Australia award for urban design. Further assessments will seal the fate of a proposed extension through to Redfern.

The project is just one chapter of a major revitalisation of inner-city Sydney, including projects for UTS, Chinatown, Darling Harbour and the Entertainment Centre, which is being demolished to make way for new residential and entertainment precincts called Darling Square and Darling Quarter. 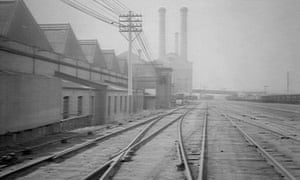 The area may now be million-dollar real estate, but homage has been paid to the Goods Line’s blue-collar past. with the designers preserving the old train line in concrete, winding through the corridor like a curved spine.

Coles said their design choices also took cues from the railways – making use of robust materials like concrete, steel, timber and gravel, but in “very delicate, fine ways”, as well as elevating and separating places of rest and play from the main track as kind of “platforms”.

For Choi it was about respecting the railway’s “critical role in Sydney’s history”. Rather than raw materials, it now transports commodities of the modern economy: ideas, people, social and cultural interactions.

“The Goods Line was this thriving exchange of goods and produce – and a lot of the city around this area has evolved from that era and transformed to become new places of knowledge and creativity,” Choi said. “It’s fantastic to see this corridor carry on a similar tradition.”