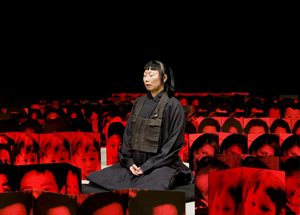 'Being Born Again' by contemporary Chinese-Australian artist Lindy Lee
will lead the design team for the new public space in the heart of Sydney’s Chinatown.
Source: http://beingbornagain.net/bios/Lindy_Lee.html

In an official Chinese event last month Xinhua reported the Lord Mayor Clover Moore discussing how the Chinese arrived in Australia in the 1850s during a gold rush, but when it ended they pursued other jobs. One was shearing sheep.  Today Australia is home to at least 200 different ethnic communities.

"We like to pride ourselves that we're one of the most multicultural countries in the world," the Mayor said.

"Here in the city we have people from 200 nationalities living here, and about 10 percent of that group has a Chinese background. And they have been very much part of the Australian community for 150 years."

"I think Chinese cuisine was the first non-Anglo sophisticated cuisine we got in Sydney, and that was many years ago now."

"From the tea rooms to the wonderful Chinese restaurants we have, and it's now a very important part of the business community and really contributes to our culture."

There are thousands of Chinese students in Australia and especially Sydney. And their families provide a huge spike in tourism numbers each February.

"It's our major trading partner. There is cultural exchange with students and Sydney has been proclaimed one of the most popular cities in the world for students to study in."

"I went to China last year to visit five cities to say thanks for coming to Sydney for New Year, and I was given a an amazing reception."  Read more HERE